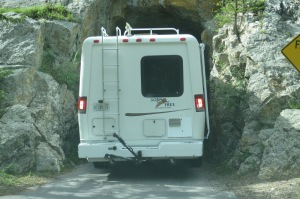 Disappearing into the mountain wall!

The Needles Highway is a spectacular 14 mile road that gets its name from the needle-like granite formations which seem to pierce the horizon along the highway.  Getting to our campground located at Sylvan Lake, which was at the end of the Needles Hwy, was an experience that we will never forget.

The tunnel as seen from the other side.

There are two one lane CCC tunnels that need to be traveled through and since we knew there were  switchbacks to be manoeuvred we had disconnected and I was following behind Leonard.  Up we climbed, the road got steeper and narrower and there were fearful looks upon the faces of those coming in the opposite direction.  Then we reached the first tunnel and Leonard seemed to barely squeeze into the hole in the mountain.   When he reached the second tunnel, he decided to take in his mirrors before advancing.  It was a sight to behold,  Trixie is 96″ wide and the tunnel was 100″ wide.  To view an amazing video, click here.  Wow,  it was thrilling once but we didn’t want to do it twice.   We found out that there was another way down without going through the tunnels and we took that way out the next day. 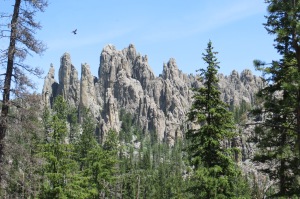 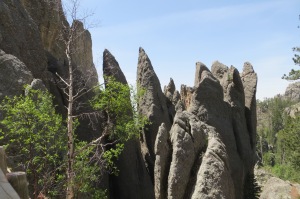 Granite peaks on the Needles road up to Sylvan Lake.

Sylvan Lake is beautiful;  surrounded by massive granite peaks and at 6300′ the air was cool and scented with pine.   We only had one night there and then we moved on, but we will never forget that tunnel experience.

This entry was posted in British Columbia 2014. Bookmark the permalink.