Posted on April 29, 2013 by sunandsandtravelers | 7 comments 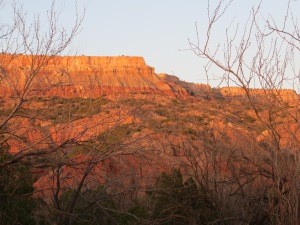 There was some very pretty hiking around these rock formations

Beautiful flagstone cabins for rent inside the park

We spent last night near Amarillo in the “Grand Canyon of Texas”,  which is 120 miles long and 800 feet deep and is the second largest canyon in the United States.  There are many campgrounds inside the park  and all of them are at the bottom of the canyon, a pretty steep drop down into the park (and a good workout for Trixie getting back out this morning).   We chose a campground at the back of the canyon that was the most picturesque, surrounded by the rock formations of bright red claystone and white gypsum.

It was extremely hot, dry and windy on our trip NW to Amarillo and when we checked in at the ranger station at the top of the canyon it was 89 F.  By the time we got into the canyon it was 92 F and we were wondering if we had made a huge mistake and even though we had hook-ups, it was still really hot.  As the evening progressed, it started cooling off and the stars were awesome.  We were able to sleep with the windows open as the temps dropped into the 60’s and we heard the yips of coyotes far off in the distant canyon.

Posted on April 29, 2013 by sunandsandtravelers | 3 comments

This was the day that we were dreading the most, having to circumnatigate the Dallas traffic.  We thought if we went on an alternate route about 40 miles north of the city on a Sunday that it would go smoothly.   It did go smoothly, but it was not the scenic country road that we thought it would be, but miles and miles of new constuction and stop lights.  The recession doesn’t appear to have hit here.

Nice roomy campsite and almost nobody else here

We made out way to Lake Arrowhead State Park just outside of Wichita Falls.  The roadsides have been covered in Bluebonnets, which is the Texas State Flower.   I think we must be traveling at the best time of the year.  Most of the roads that we’ve been on have had wildflowers on them and the trees are just starting their spring growth.  It’s green right now in Texas but Lake Arrowhead, which is actually a reservoir is only at 40% and there are “Pray for Rain” signs on the roadsides.

The campground has lots of spring growth, tall grasses and tons of birds.  It reminds me of a place we were at on the edge of the Australian outback and it would be a great place to spend more time. 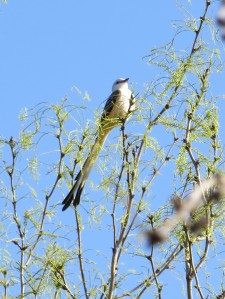 We saw some birds that we have never seen before (thanks for the loan of the field guide Clay) including flocks of scissor-tailed flycatchers.  It was amazing to see and hear them flying around.

There was also an active prairie dog town with youngsters and adults sounding the alarm that intruders were nearby.    Laia has never seen anything like that and was peering down the holes trying to figure out where they went to.

A State Park with it’s very own oil well

Posted on April 28, 2013 by sunandsandtravelers | 2 comments

Day 3 of our trip had us crossing the Mississippi River into Louisiana.  My first ever viewing of the huge river.  I know it is at flood stage further north and I wondered what it would look like here at Vicksburg.  It was high but didn’t appear to be flooding.

We made it into Texas

We decided to push on through Louisiana and across the state line into Texas where  we found Caddo Lake State Park. 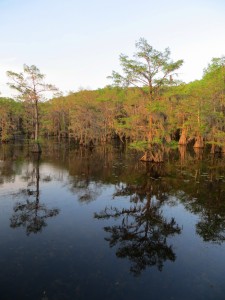 Caddo Lake is the only natural lake in Texas and was created by a mass of trees and flood debris that obstructed the Red River over 100 years ago.      A dam maintains the water today, which is primarily a maze of bayous – thick with ancient bald cypress trees.   What a great place to paddle around and I wish we had brought our canoe.

Even the campsites are bigger in Texas!

Tomorrow we press on.   We’re pleased with our progress and everything is performing well, so that gives us a little leeway in our schedule.  After tomorrow I think we will be half way there.

Posted on April 26, 2013 by sunandsandtravelers | 6 comments

Packed and ready to go!

It’s hard to believe, after all the planning the time has come and we have finally departed on our long awaited trip out to the Western USA.

Our first day was an easy one, with an overnight at Jerry and Linda’s.  Jerry is  a very good friend and former coworker of Leonard’s who has a lovely cabin in a fly-in community in north Florida.

We met the neighbors and enjoyed Happy Hour at Jack and Karen’s,  where Leonard played the banjo.   It was a full moon and we slept to the sounds of the whippoorwill.  Such a tranquil setting and we enjoyed it thoroughly.    Jerry and Linda sent us on our way after a hearty breakfast and we started counting down the miles as we headed west. 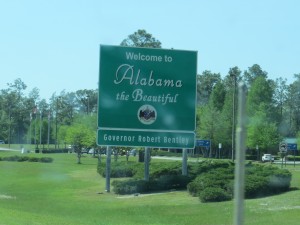 We made it through Alabama  to Biloxi, Mississippi, where we are tonight.  Tomorrow we press on and hopefully head for Shreveport, LA.

Terry and Barb drive their 1989 Westfalia down from Michigan every year. It has a newer fuel injected Jeddi diesel. They are rightly proud of the fact that they get over 20 miles per highway gallon, even while pulling a small trailer for Barb’s stuff. (Terry said he has to keep his stuff in the glove compartment).  They had just added the screen room and were very happy with increasing their living space eight fold (from 10 to 80 square feet). Barb said they walk eight miles a day and I believe it, because it seemed like every time I looked out the window, I saw them walking by. You’ll also see the bicycles in the photo. They either walk or ride their bikes most of the time because once they set up camp, they don’t move for two weeks! 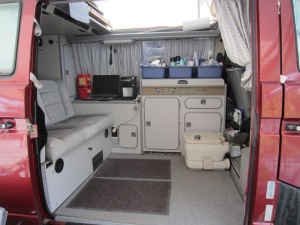 So, yes, they manage to have two weeks of food in the Westfalia. Terry said they drink a couple glasses of wine a night so when they waltz up to the checkout counter with seven or more bottles of wine, he just points to Barb.

I’m not quite sure how to describe the owner of this van. Mainly because it was really a group of folks living in and around it (three couples). They were a cross between hippies and rainbow people.  A constant cloud of smoke came from their campsite and, most of the time, there was no fire. Anyway, they were always pleasant (go figure) and didn’t mind me taking pictures of the big bug.

While touring Pidgeon Key we, once again, heard about the no name huricane that killed over 600 people and destroyed a large portion of Flagler’s Overseas Railroad back in 1935.  A rescue train, pulled by engine 447, was sent but only made it as far as Matecumbe Key.  The following links are a great history of Flagler’s Folly and the storm.  None, however, answer the question; Where is engine 447?

Engine 447 still stands, the rest of the train was washed off the tracks by the storm surge.

The link below provides a good overview of Flagler’s dream.  It is much more realistic than the video you’ll see if you ever take the Pidgeon Key tour.  There, Flagler is almost God like.  Everything he did was for philanthropic reasons only.

This is a very thorough and well written account of the no name huricane.  It is not for the faint of heart, as you’ll see if you read through the epilog.  Still, though, it doesn’t answer what happened to old 447.

Did it end up in Mexico?

Posted on April 3, 2013 by sunandsandtravelers | 2 comments

Who wouldn’t want to have their very own Vixen? I remember finding these on the Internet a few years back when I was looking for the perfect RV. This is the first time I’ve ever seen one in person. Danny and Dee are the proud owners and were kind enough to let us look her over and take a few pictures. Danny said there were only 562 of them made. This thing is just plain cool. Wide and low slung, it apparently drives like a dream and the BMW diesel delivers 30 mpg highway. Notice how the entire roof lifts up on one side. It’s hard to see in the pictures, but the floor is sunken so it was easy for me, at 6 ft. 2, to stand up inside.

The back of the Vixen