We’re heading north but first a stop at Lewis and Clark Caverns SP near Bozeman, MT.  Here we met up with our friends from Florida, Steve and Diana who are in Montana for the summer and Leonard’s cousin David and wife Dottie, whom we will be traveling with this summer.

We thought we would be smart and tour the caves early in the day since the tour involves a strenuous 3/4 mile uphill hike to the cave entrance and it was quite hot.    You must be able to get there in 1/2 hr or you won’t be allowed to go on the tour and you can’t go unescorted.  We were about to pay for our tickets when tragedy struck, a phone call from a frantic guide at the top reporting a medical emergency.    We saw it all unfold before our eyes, a person had a heart attack at the top and there was no way to get up there quickly, only walking.  An EMT who happened to be there went up and tried to help and eventually an ambulance arrived and they walked with their gear and a stretcher up the hill.   Then they all slowly started walking back down the hill with the body on the stretcher.  It was all very sad.  But did that deter us, no way.  So instead of being able to hike in the cool of the morning we chose to go up in the hottest part of the afternoon.  (Whose idea was that?)  But we did it and survived to tell about it! 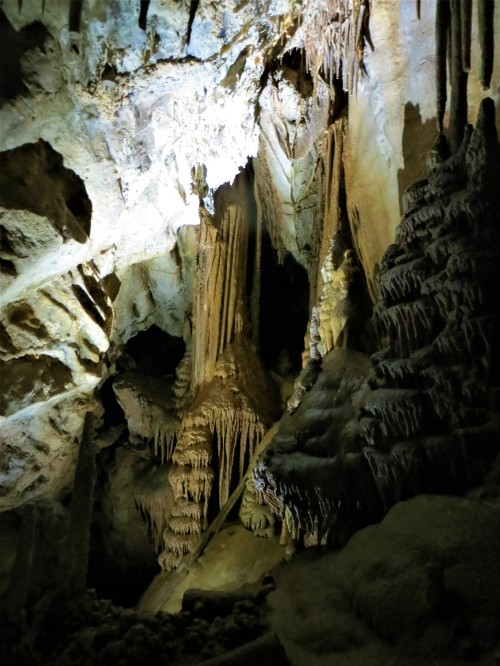 Despite the name, neither Lewis nor Clark ever found these caverns although they did pass by on the Jefferson River in the valley below.    The caves are a refreshing 48 degrees inside and our 2 hour tour was so much fun (after that horrible hike up).  We hiked a total of 500 stairs but most of them were downhill, did a lot of stooping into narrow passageways and even had a limestone slide we to go down.  The formations are beautiful and if you’re lucky you may even get to see a Townsend big eared bat hanging above, which we did.

Our campground as seen from the cave entrance.