The Alaska Hwy – Ft St John to the Yukon

Clean windows and a cup of coffee became the morning routine before hitting the road. This was a fairly typical campground in the more remote sections of the Hwy.  Nothing fancy but certainly adequate.

We easily settled into a kind of routine for our journey north.  Leonard & I were delegated lead vehicle due to the fact that we had already sustained front end damage from hitting a deer while in Arkansas!  We knew there would be a risk of hitting an animal on this trip, but never dreamt that it would happen shortly after we left home.  Anyways, due to the fact that our grill was now held together with a strap and we already had a huge chip in our windshield (also from Arkansas – go figure) we got to be lead vehicle and chief animal spotters.  We would see the animals, and relay the info via CB back to the others and they would be prepared with their cameras.  It was fun.  It was nice being in a convoy as there were several instances when mechanical issues arose and between all three of them the proper tool was always found and things got fixed. 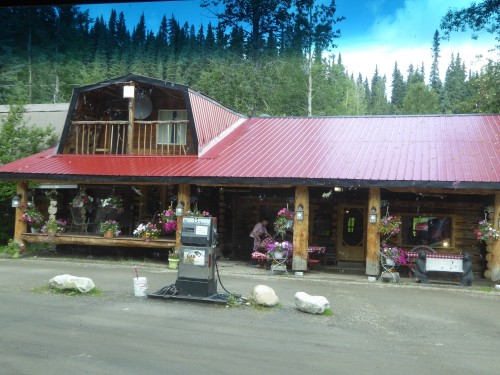 Tetsa Lodge and Campground – home of the best cinnamon buns on the Alaska Hwy at MM 375.

These two young females attracted some male attention from the other side of the lake.           Toad River Lodge and RV Park  MM 422

Toad River Lodge was a nice surprise.  A pretty campground on very pretty lake with lots of wildlife around.  This area is known for it’s wildlife and for being a particularly scenic portion of the Alaska Hwy.  We all agreed that had we known how nice it was there with campsites available right on the lake, we would have stayed another night.  But we had reservations down the road and had to keep moving.  Perhaps next time. 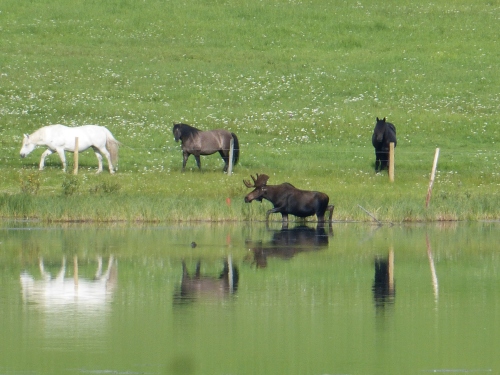 Hanging with the horses but gotta go see the girls on the other side of the lake.

The road less traveled in northern BC. 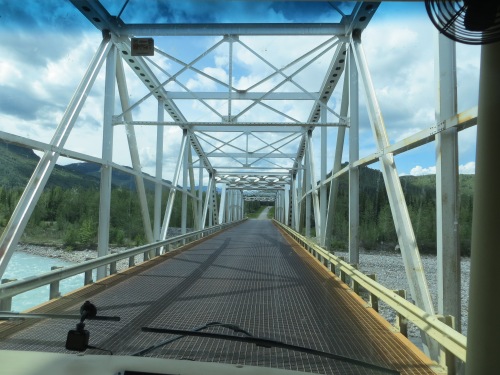 There are lots of rivers to cross and this is the type of bridge used.    Some are single wide but most are two lane and they have metal grates for the snow to fall through.

Woodland caribou hanging out at the rest area.

Having spent the first 13 years of my life in northern BC I was familiar with most of the wildlife but I had never seen caribou.   I thought they were an Arctic animal.  These are Woodland Caribou, a subspecies that is larger and darker than the Arctic caribou and reside in the boreal forest of BC, Yukon and Newfoundland. 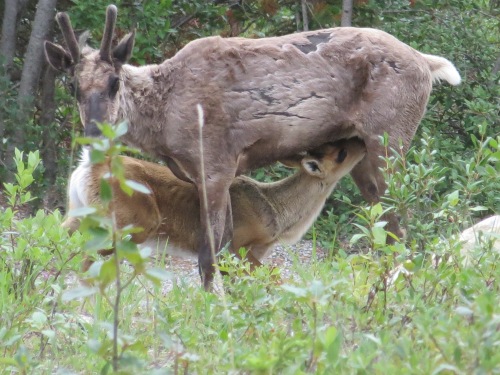 This mother seemed quite content to stay near the rest area. Perhaps she felt more protected there from bears.

The Wood Bison, a subspecies of the Plains Bison also roam the boreal forest of northern BC.

Another animal from the far northern reaches of BC and the Yukon is the Wood Bison.  We saw quite a few of them, in herds or sometimes just single males.

This guy was just sauntering down a bridge towards us.  It appears they may not be the brightest animal in the world as we eventually saw quite a few that had been hit by cars.

As we slowed down to take photos, he became defensive, curled in a ball and made his quills stick out! Unfortunately when we crossed that same bridge several weeks later we saw a dead porcupine, probably the same guy.

The boardwalk through the boreal forest to a hidden paradise!   Often there are moose along the pathway, but fortunately we didn’t see any. 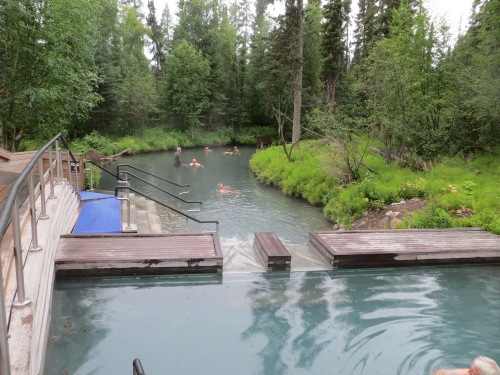 This place is truly a gem and should not be missed if traveling on the Alaska Hwy.  There is a full service campground next to the hot springs that is extremely popular and is usually full by noon.  The springs themselves are open 24 hours, but walking on that boardwalk at night seems risky.  Moose and bear are very common in the area because of the lush vegetation. 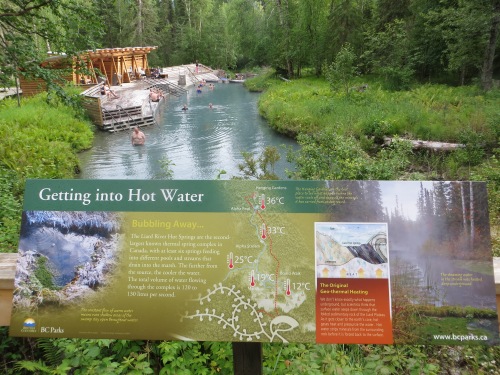 The water was between 108F and 126F. You get in at the coolest area and then when you get used to it you get into the really hot areas (for just a little while).

The water had a silty appearance from the minerals but no odor and the bottom was sandy. All completely natural. 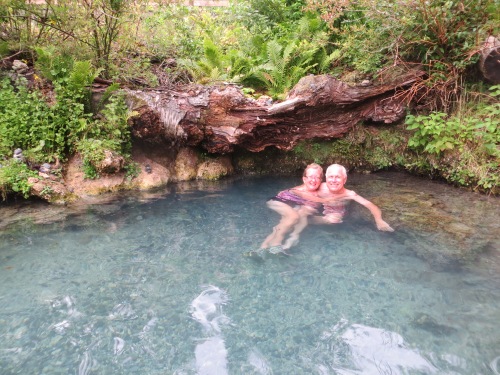 It’s extremely lush, almost tropical around the pools. There are even 14 species of orchids that grow there.