We arrived here yesterday after a short journey from Custer SP.  We were intending to visit for just a few hours and then carry on, but there is a gorgeous KOA campground right at the entrance to the Park that was calling our name, so  we decided to stay for the night.    The view is unparalleled, the weather incredible and we like it here so much that we’re going to stay for another night.

We did the 1.3 mile loop trail around the base of the Tower yesterday and were met with great views every few feet.  The thing that has surprised us both is how lush and green it is here.  There are the tall pines, 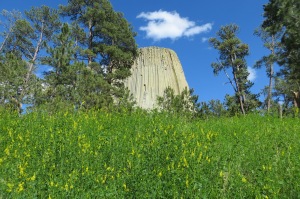 aspen and vast grassy areas surrounding the Tower.   We were both under the impression that the Tower was a large monolith located in a dry, arid region somewhat like Ayers Rock in Australia.  It’s nice to be met with the scent of pine instead of dust. 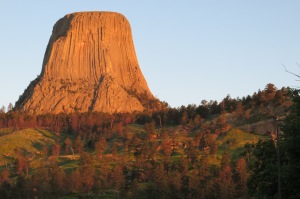 The next destination on our journey was intended to be Glacier National Park, but they just received a freak June snowstorm which dumped up to 2 feet of snow in the higher elevations and flooding in the lower elevations has the campgrounds closed.      We don’t want to go anywhere near there until all the roads are open and things have dried out.  This has caused us to do a major course correction.  We’re now going to head directly west, over to Washington State and up to Vancouver Island from there.  We’ll do our loop in reverse and I suspect more changes are to come.  That’s the good part about not having reservations, we can just take it one day at a time.

This entry was posted in British Columbia 2014. Bookmark the permalink.