Posted on August 13, 2016 by sunandsandtravelers | 8 Comments 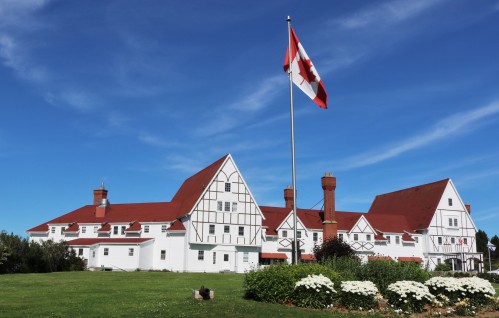 Almost every road we took on Cape Breton Island had some sort of Scottish influence.   There was the Gaelic College in St Ann’s,  where  Californians were learning or improving upon their fiddle skills to the Keltic Lodge in Ingonish,  now owned by Parks Canada and undergoing restoration.   The beautiful Keltic Lodge was built in 1940 on cliffs overlooking the Atlantic and is famous for its championship 18 hole Highland Links golf course.  Quite an amazing bit of history associated with the Lodge is that it was closed in 1942 because of the war, but with its abandoned luxury and protected harbor it became a favorite shore leave destination for U-boats crews.  How scary is that! 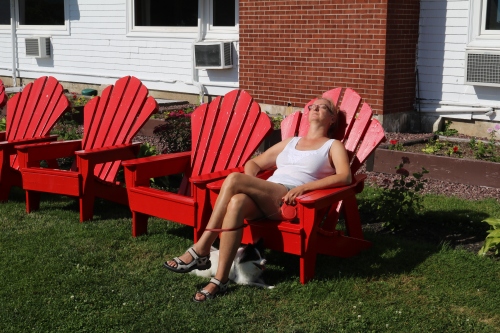 Just a bit of shut-eye after a hard day of sight-seeing! 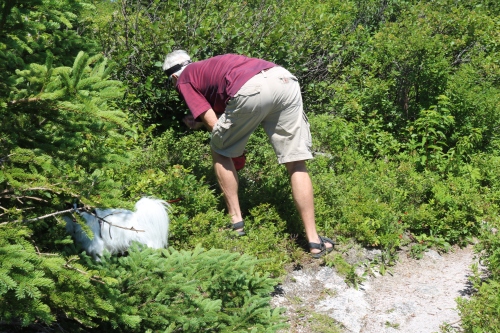 Our summertime hikes have put us on trails loaded with wild raspberries and in this case wild blueberries. 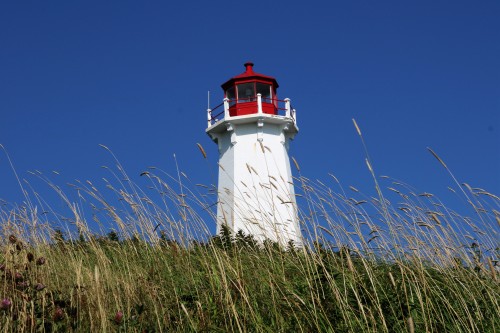 Yet another scenic lighthouse, this one is at Louisbourg 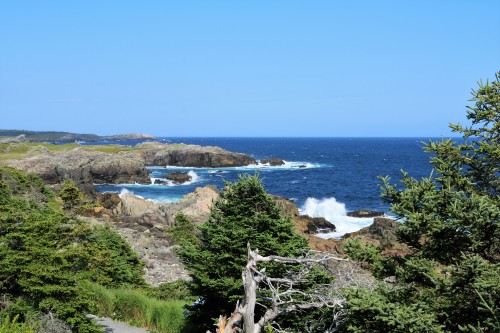 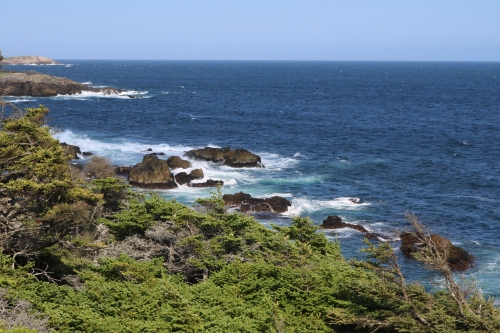 The reconstructed Fortress of Louisbourg on the rocky shoreline just east of present day Sydney, NS is the largest of its kind in North America.  Founded by the French in 1713, it fell under siege twice to the British before being demolished in the 1760’s.  Reconstruction began in the 1960’s, rebuilding one-quarter of the original French town and fortifications. We spent a very pleasant day there watching the reenactments including cannon and musket fire and talking with the locals. 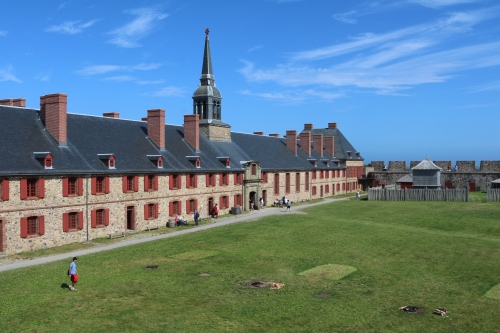 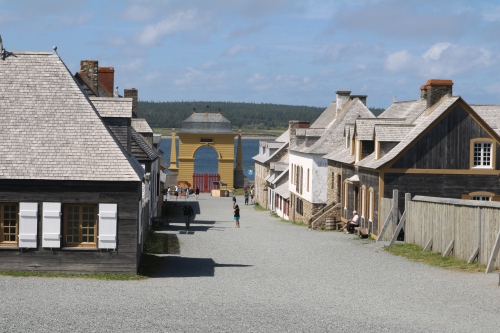 The main street with demonstrations inside various buildings 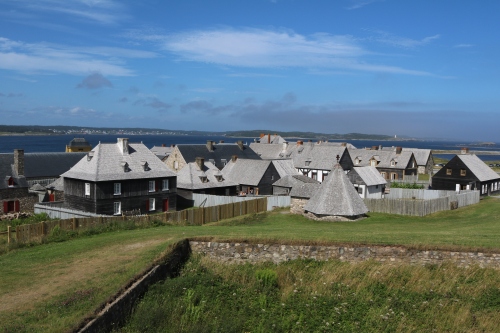 A portion of the walled Fortress overlooking the Atlantic Ocean 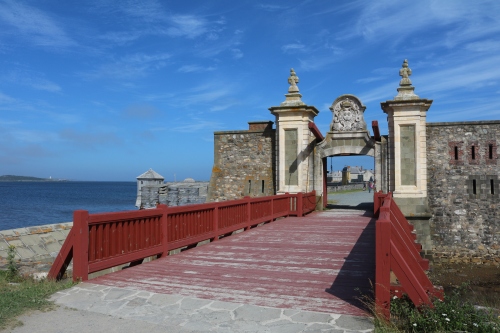 After leaving our Provincial Park campground near Louisbourg we left Cape Breton Island and returned to mainland Nova Scotia and the port of Pictou, the birthplace of New Scotland where we will catch the ferry to Prince Edward Island. 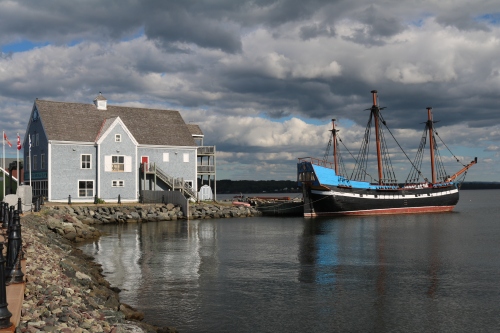 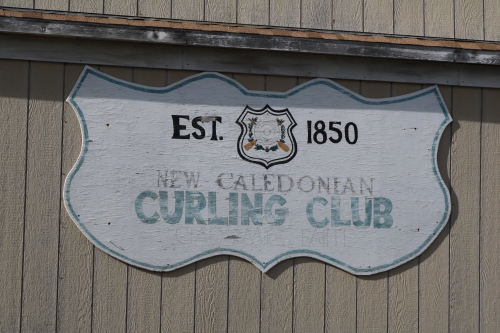 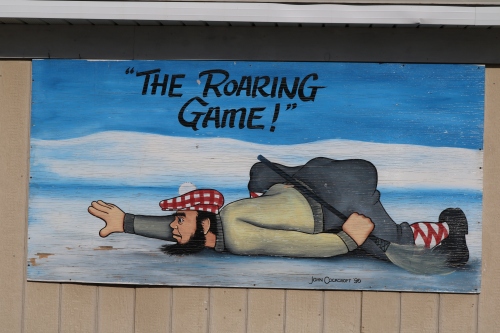 This mural adorned the side of the curling rink 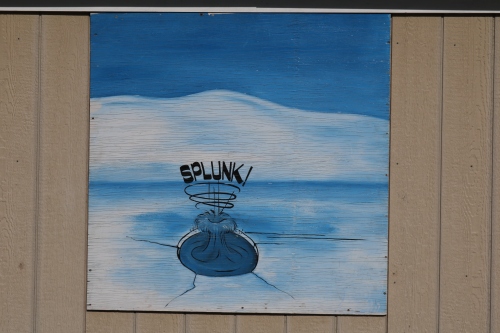 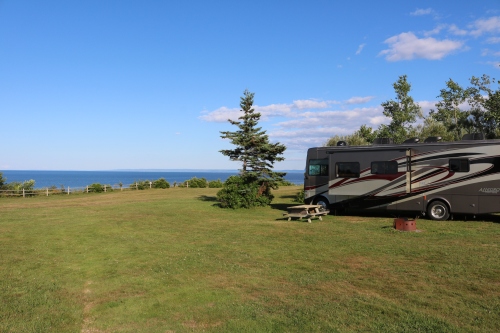 We spent our last night in Nova Scotia at Caribou-Munroes Provincial Park overlooking Northumberland Straight and Prince Edward Island in the distance.  We had a stunning campsite overlooking the water and we were enjoying the sunset when we started to hear a very distintive sound – bagpipes.  Someone was playing on the beach not far from our site. What a perfct way to end our stay in Nova Scotia.

This entry was posted in Northeast 2016, Uncategorized. Bookmark the permalink.