We’ve just returned back into Moab after spending 3 days dry camping at Devils Garden Campground in Arches National Park.  The campground is situated at the very end of the 18 mile long road into the park, with a 1200 ft

Devils Garden Campground in the distance

elevation gain from the entrance.  There are flush toilets and water faucets available to fill water bottles but other than that, no facilities whatsoever.

We spent our time hiking and exploring all the beautiful arches and rock formations in the park.   Approximately 5 months ago,  when I was making the reservations, I  signed us up for a Ranger guided tour of the Fiery Furnace (so named because of the way it glows when the afternoon sun hits it).   This is a region of the park that is off-limits to the general population, unless you get a backcountry pass and watch a video, or go with a ranger.  There are no trails to speak off, just scrambling up 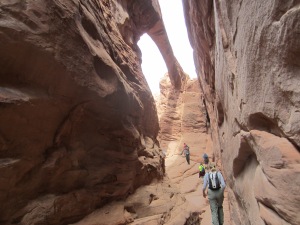 Barely room for the Camelback

and down slickrock, walking on narrow ledges, jumping across cracks, butt scooting down rocks and squeezing through narrow slots, etc.  One

my legs were like noodles.  The pace was fast, much faster than I would have liked and

at 3 hours the tour was done and so was I.  I could barely walk out of there!  It was beautiful but the toughest thing I’ve ever done.

One of the slots

Up into the maze 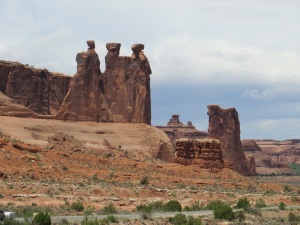 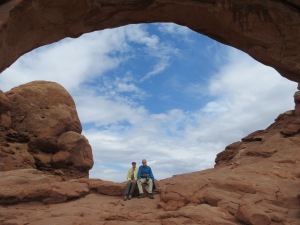 A storm system came in (thankfully not while we were in the Fiery Furnace) which made for some really dramatic lighting.  After a day of recuperation, I regained my ability to walk and continued our explorations.   Even though we had 3 days, we still didn’t get a chance to see it all and may head back in there from Moab if we have the time.

Double Arch (Look closely – there are people there)