When a massive influx of military personnel and laborers arrived to work on three major construction projects – the Alaska Highway, the North West Staging Route airports, and the Canol Pipeline – during the post-war boom, housing was at a premium in the once sleepy town of Whitehorse.  A local builder responded to the need in 1947 by constructing the Log Skyscrapers, the first privately built multiple-dwelling rental accommodation in Whitehorse. The Log Skyscrapers are in their original location, and continue to provide residences in an increasingly commercial neighborhood.

These two buildings are the only buildings of this type in Canada and their architectural significance lies in their unusual appearance. The multi-storied log construction has given them landmark status within the Yukon Territory.

This 3 story Log Skyscraper is adjacent to the 2 story one and both continue to be used today.

You can’t drive into downtown Whitehorse without seeing the famous SS Klondike, a National Historic site and run by Parks Canada.  They offer informative tours on these impressive boats that were so vital during the Gold Rush and up until the 1950’s. 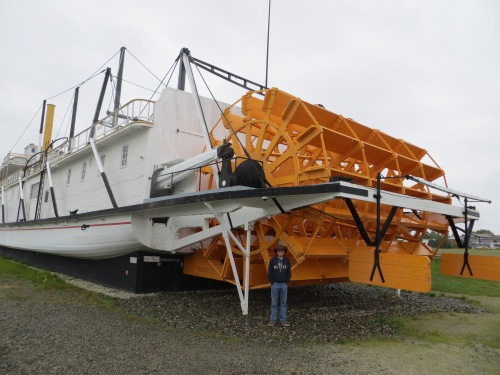 The only remaining sternwheeler, the SS Klondike in Whitehorse.  The sternwheelers supplied the mighty Yukon river from the early 1900’s to 1950.

Launched in May 1937 after the first SS Klondike ran aground, the sternwheel steamboat S.S. Klondike II plied the route between Whitehorse and Dawson on the Yukon River. She transported general merchandise, local products such as silver-lead ore and gold ingots, as well as passengers to and from Whitehorse and Dawson City until the opening of an all weather road between Whitehorse and Mayo in 1950.   Built specifically to have a very shallow draft for navigating the treacherous Yukon River, she could carry 300 tons of cargo with only a 40 inch draft.   Travelling downstream took approximately 1.5 days, but upstream trips took 4-5 days. 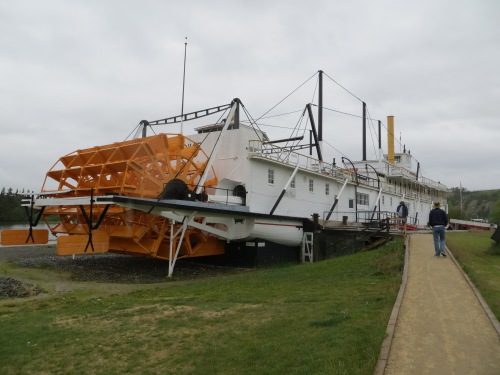 The SS Klondike was built with an exceedingly shallow draft of only 40″ when fully loaded with 300 tons of cargo.  In addition to all the cargo she also had 40 crew and 75 passengers.

We spent a whole afternoon at the MacBride Museum in Whitehorse.  It’s a very well done museum covering a variety of subjects including the history of the Gold Rush in the Yukon with a great film;  the First Nations culture; animals indigenous to the region; Robert Service and of course a great display regarding the building of the Alaska Hwy during WWII.   BTW, there was a great food truck right across the street for fueling up prior to a busy afternoon.

A representation of all the gold that was discovered in the Yukon fueling the Klondike Gold rush. 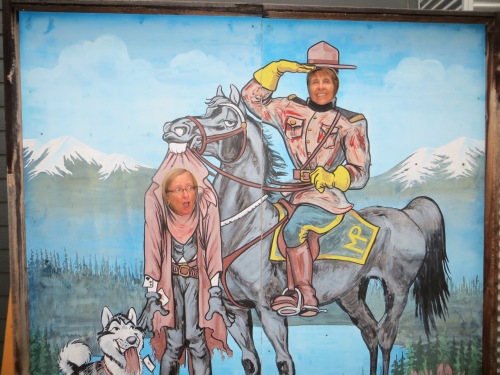 The Mounties got their girl!

The popular Klondike Rib and Salmon Restaurant is housed in one of the two oldest buildings still in use in Whitehorse.   The dining room was originally opened as a tent frame bakery around 1900.

In 1929 the building was purchased and turned into “Klondike Airways”  and it became a mail and freight business. Although the owners hoped some day to buy a plane as a means of transporting freight and mail, they never did. Using snowmobiles and caterpillars, the company carried about 110,000 lbs of mail to Dawson City each year. Before 1921 only first class mail was delivered in the winter. The rest of the mail waited in Whitehorse for the ice to break up and the steamers to sail which usually happened sometime in May. 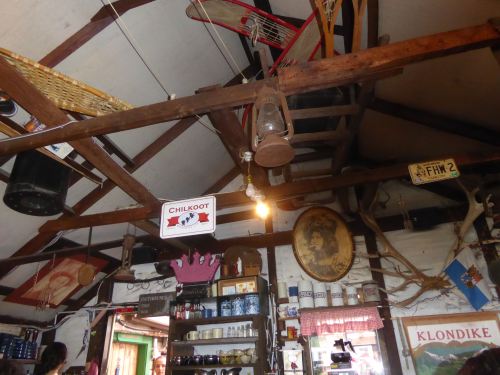 The canvas interior of the tent/restaurant with artifacts from the region.

The best use I’ve seen for a snowshoe!

Our last meal together as we were not going any further with our wonderful convoy partners.  They were headed on to Fairbanks and we would wander where ever our hearts took us.