After our last hike we opted for a more leisurely hike yesterday to a site that is sought after by photographers from around the world.  It is a small group of ruins that are built under the usual sandstone escarpment.   When the sun is at a certain angle in late morning, it reflects light up to the sandstone ceiling and  makes the whole thing come alive, as if it were on fire.

By the time that magic hour approached there were about 6-8 photographers there all with their tripods and one guy with a large format camera using plates to capture images.   We had more fun just watching all the nervousness and repositioning by them than we did worrying about getting that perfect shot.  I know my camera isn’t adequate for that,  but it does one thing that theirs does not…it sits in my pocket. 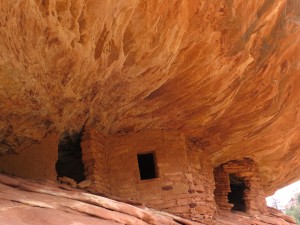 House on fire without the fire

6 responses to “House on Fire Ruin”